Gynecomastia is the development of female type breasts on a male. 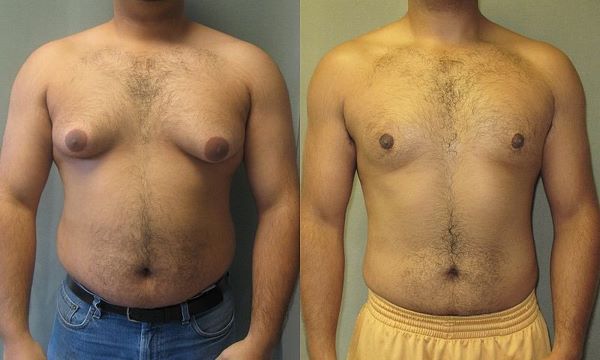 An advanced case of Gynecomastia

This can be an unwanted side-effect of some of the oral medications used to treat male pattern baldness due to the hormonal changes they sometimes bring about.

Breast tissue even in men is very sensitive to the effects of the female sex hormone estrogen in the blood. These effects are dampened by testosterone however some oral medications can cause an imbalance of estrogen to testosterone and cause breast development

Men that are overweight tend to be more affected than thin men. There is a clear difference however between breast tissue and normal fat.

To determine if you have Gynecomastia lie flat on your back and grasp your breast tightly between your thumb and forefinger with the fingers spread about two to three inches apart. Gradually move your finger and thumb towards the nipple. Gynecomastia will feel like a firm, rubbery disk-like mound of tissue more than a 1/2" across. This firmness will seem to be stuck to the back of the nipple. The area may also feel very tender or painful if it has recently developed. 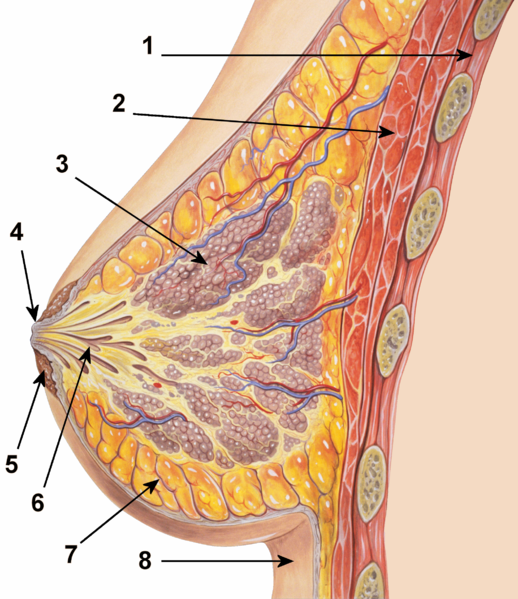 In early fetal life, epithelial cells, derived from the epidermis of the area programmed to later become the areola, proliferate into ducts, which connect to the nipple at the skin's surface (4). The blind ends of these ducts bud to form alveolar structures in later gestation(3). With the decline in fetal prolactin, placental estrogen and progesterone at birth, the infantile breast regresses until puberty.

Although estrogens and progestogens are vital to mammary growth, they are ineffective in the absence of anterior pituitary hormones. Thus, neither estrogen alone nor estrogen plus progesterone can sustain breast development without other mediators, such asGH and IGF-1.

Males will develop female type breasts through the same process described above. Since the development of breast tissue in males occurs in an similar manner to that of females the same hormones that create female breast tissue can cause gynecomastia.

The testes secrete up to 10 mg of estradiol daily. Since this only comprises about 15% of estrogens in circulation the remainder of estrogen in males comes from the aromatization of testosterone. Any cause of excess estrogen can initiate the cascade to breast development including excess testosterone.