What is male pattern baldness?

Androgenetic alopecia can be defined as a male hormone dependent process with continuous miniaturization of sensitive hair follicles by unknown factors. At it's core is a continuous process of damage to hair follicles by Dihydrotestosterone or DHT for short. This process results in a type of alopecia (hair loss) that follows a definite pattern in those individuals who are genetically predisposed. A genetic predisposition is a feature of Androgenetic Alopecia but the exact genes responsible are unknown. However the sum of the knowledge of hormonal effects on hair growth is far more advanced and many treatments are based on a hormonal approach. 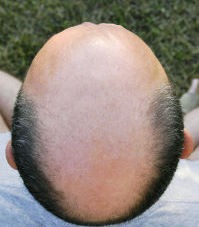 Androgens (male hormones such as testosterone), are part of the biology of gender by stimulating and controlling the development of masculine characteristics. Dihydrotestosterone or DHT is a form of testosterone and is three times more potent than testosterone.

The androgens, testosterone and the potent dihydrotestosterone (DHT) have a large influence over human hair growth. Androgens cause the growth of body hair such as beard, underarm, and pubic hair. Androgens however are not required for the growth of scalp hair but DHT is necessary for the development of male pattern baldness. As we said in the overview, without testosterone Androgenetic alopecia cannot exist.

The affinity of DHT to the androgen receptor is about 5 times higher than that of testosterone thus androgen affected hair will be affected more by high DHT than high testosterone. Over time it is thought that DHT damages the hair follicles and causes individual hair shafts to become thinner and thinner through each new hair cycle. This thinning continues until the point where no hair is produced by the follicle. This is typically called miniaturization. The end result is a hair follicle that shuts down completely and will produce only small fine hairs called vellus hair rather than normal terminal hair. Baldness is the final result of years of thinning of the individual hairs produced by damaged follicles. Only scalp hair from the front and top of the head are susceptible to DHT damage for reasons that are not clear.

In August 2012, Scientists at the University of Pennsylvania announced that they had discovered Prostaglandin D2 (PGD2) was found to be present on the scalp of balding men at far higher levels than normal, preventing hair follicles from maturing and therefore stopping them from working and growing hair.

Experts do not know why DHT damages hair follicles or if the follicles are really damaged at all, nor why only a portion of scalp hair is effected by DHT, all this is being reviewed in light of the role of Prostaglandin D2 (PGD2) just recently being implicated in hair loss. Elevated levels of PGD2 in scalp hair follicles may be partially responsible for male pattern baldness or may just be a marker for inflammation, a symptom not the cause. Further, the naturally occurring prostaglandin E2 (PGE2) is known in medicine as dinoprostone is thought to enhance hair growth and the balance of PGD2 to PGE2 seems to be important. Another prostaglandin PGF2a has been shown to stimulate hair growth in products such as Lattise (Bimatoprost). There are medications such as Minoxidil that increases PGE2 and other medications just being tested that reduce PGD2. It is not clear as of 2012 how these prostaglandins interact to cause male pattern baldness, however it is clear that to effectively treat hair loss from male pattern baldness you must reduce or eliminate DHT through a combination of oral and topical medications.

It's hard to argue with experts that DHT and testosterone is not the root cause hair loss when they point to men that have reduced testosterone by choice. Monks castrated before the onset of baldness never show male pattern baldness due to reduced androgen levels from castration. They further point out that Transsexuals, (men who change sex their into women) take a mix of drugs to reduce testosterone and increase the female hormone estrogen. Many of these transsexuals report the total reversal of hair loss due to low androgen levels. Clearly testosterone and DHT is implicated in the process regardless whether a symptom or cause. 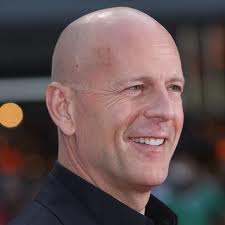 Some guys just look good bald, but if your not one of them read on

There are other causes of hair loss not related to male pattern baldness and those include: 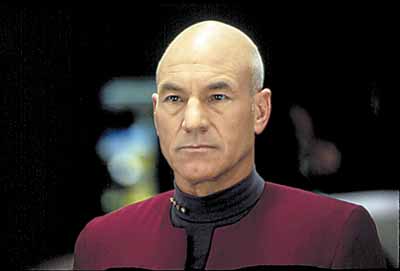